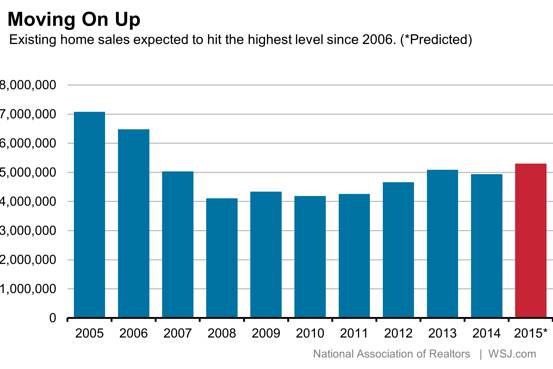 Existing homes sales this year are expected to hit levels not seen since just after the peak, in 2006, driven by strong job growth, low interest rates and a gradual loosening of lending standards, according to the National Association of Realtors.

Lawrence Yun, chief economist at the realtor association, said in his mid-year forecast on Thursday that he expects home sales to end up around 5.3 million in 2015, a significant pick-up from 4.9 million sales in 2014.

Last year, economists also anticipated robust growth in the home sales, but were disappointed when a spike in interest rates early in the year and poor wage growth dampened the market.

Mr. Yun said that early results this year point to a pick-up in home sales, including sales in the first few months, foot traffic at homes on the market and strong job growth. Buyers who have been kept out of the market by low wages and strict lending standards are likely to start coming back.

“There is sizeable pent-up demand,” he said in an interview.

To be sure, the volume of sales Mr. Yun is anticipating remains well below recent high in 2005 when more than 7 million homes were sold. Mr. Yun said the market is likely a decade off from hitting those levels again. In 2006, sales fell to 6.5 million and since then have hovered around 5 million sales or fewer.

If interest rates or prices rise, making houses less affordable, that could hold back the volume of sales, which Mr. Yun said shows the need for more new-home construction.

Robert Dietz, vice president of tax and market analysis at the National Association of Home Builders, said that he anticipates that 2015 will be the first time during the recovery that the growth of single-family home starts will exceed apartment starts. That would be a significant shift for a recovery that has been driven by a boom in rental construction while single-family home construction has grown less robustly.

Still, Mr. Dietz said, new home construction will remain about half  of normal production levels. Homebuilders are being held back by the shortage of construction laborers, the difficulty of obtaining construction loans and the elusiveness of first-time home buyers, he said.

Real estate news and analysis from The Wall Street Journal.